Energy, E, is transferred, or work is done, when a force, F, acts on an object in the direction of its motion through a distance, s.

Thus, one joule is equal to the energy transferred to an object when a force of one newton acts on that object in the direction of its motion through a distance of one metre.

The kinetic energy of an object is directly proportional to the product of its mass and the square of its velocity:

The electric potential energy, UE, of a point charge in the presence of another point charge in vacuum is dependent on the magnitudes of the two charges, q1 and q2, their distance apart, R, and the Coulomb constant, ke.

One joule is equal to the energy required to move an electric charge of one coulomb through an electrical potential difference of one volt, or one coulomb-volt (C V). This relationship can be used to define the volt.

One joule is equal to the energy dissipated as heat when an electric current of one ampere passes through a resistance of one ohm for one second.

When a chemical reaction occurs, the molecular bonds of the reactants are broken, and new bonds are formed to make the products.

Energy is always required to break a molecular bond, and energy is released when a bond is formed. This is known as bond energy. In a chemical reaction, the change in energy, or enthalpy, can be estimated from the difference in the bond energies of the reactants and products.

For example, when water is dissociated, the bonds of two water molecules are broken to form two molecules of hydrogen and one of oxygen:

The total energy difference is 1836 kJ – 1358 kJ = 478 kJ, which indicates that the reaction is endothermic and that 478 kJ of enegy is needed to be supplied to carry out this reaction.

Food energy is chemical energy derived from food through the metabolic process of cellular respiration. Carbohydrates, fats and proteins are all sources of food energy.

A minimum average amount of food energy is required to maintain human metabolism. The amount needed varies according to the amount of energy expended in physical activity. The recommended daily food energy intake in the UK is 8400 kJ. In Australia it is 8700 kJ.

A consequence of relativity theory is that any object that has a rest mass, a mass when stationary, also has an equivalent rest energy. The rest energy, E0, of an object is directly proportional to its mass, m:

Using SI coherent units, the proportionality constant is the speed of light in vacuum. Thus:

The amount of energy, E, equivalent to 1 kg of matter can be calculated:

One kilogram of matter is equivalent to approximately 89.9 petajoules of energy.

Similarly, the mass, m, equivalent to one joule of energy, E, can be calculated: 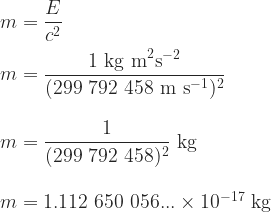 One joule of energy is equivalent to approximately 11.1 femtograms of mass.

The nucleus of an atom is made up of protons and neutrons, collectively called nucleons. The mass of a nucleus is always less than the sum of the individual masses of its nucleons. This difference is called the mass defect, and is equivalent to the nuclear binding energy which holds the nucleus together. The mass defect, Δm, is equal to the energy that would be released when forming the nucleus from it constituent nucleons. Nuclear binding energy can be calculated from the Einstein’s mass-energy equivalence relationship:

Power is the rate at which energy is transferred. It is equal to the amount of energy transferred per unit time.

Inverting this relation gives an expression for energy in terms of power:

One joule is equal to the energy required to produce one watt of power for one second, or one watt second, symbol W s.