The definition of the kelvin implies the exact relation k = 1.380 649 × 10–23 kg m2 s–2 K–1. Inverting this relation gives an exact expression for the kelvin in terms of the defining constants h, ΔνCs and k :

The effect of this definition is that one kelvin is equal to the change of thermodynamic temperature that results in a change of thermal energy k T by 1.380 649 × 10–23 J.

The kelvin is named after the British physicist and engineer William Thomson, 1st Baron Kelvin (1824 – 1907).

Thermodynamic temperature is a measure of the average kinetic energy of the particles in a substance.

The absolute temperature of a gas is directly proportional to the average kinetic energy of its molecules. The Kelvin scale is an absolute thermodynamic temperature scale using as its null point absolute zero, the temperature at which all thermal motion ceases in the classical description of thermodynamics.

The ideal gas law, also called the general gas equation, is the equation of state of a hypothetical ideal gas. It approximates the behaviour of gases under many conditions.

Combining this with the ideal gas law gives an expression for temperature, sometimes referred to as the kinetic temperature. 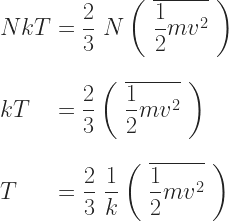 It can be seen that the Boltzmann constant is a proportionality constant which relates the average relative kinetic energy of particles in a gas to the thermodynamic temperature of the gas.

Due to the fact that the current definition of the kelvin fixes the numerical value of the Boltzmann constant, k, instead of TTPW, the latter must now be determined experimentally. At the time of adopting the current definition, TTPW was equal to 273.16 K with a relative standard uncertainty of 3.7 × 10−7 based on measurements of k made prior to the redefinition.

The triple point of water occurs at a partial vapour pressure of 611.66 Pa.

The spectral radiance of a body varies with its temperature. It is a description of the amount of energy that it emits at different electromagnetic radiation frequencies. Spectral radiance is the power emitted per unit area of the body, per unit solid angle of emission, per unit frequency.

Wien’s displacement law encapsulates the relationship described in Planck’s law between the wavelength of the peak radiance and the temperature of a black body. Wien’s law states that the black body radiation curve for a given temperature has a peak value at a wavelength that is inversely proportional to the temperature.

In electronics, the kelvin is used as an indicator of how noisy a circuit is in relation to an ultimate noise floor, i.e. the noise temperature. The Johnson-Nyquist noise of discrete resistors and capacitors is a type of thermal noise derived from the Boltzmann constant and can be used to determine the noise temperature of a circuit using the Friis formulas for noise.