The definition of the kilogram implies the exact relation h = 6.626 070 15 × 10−34 kg m2 s–1. Inverting this relation gives an exact expression for the kilogram in terms of the three defining constants h, c and ΔνCs :

The effect of this definition is to define the unit kilogram metre squared per second, symbol kg m2 s–1, the unit of both the physical quantities action and angular momentum. Together with the definitions of the second and the metre this leads to a definition of the unit of mass expressed in terms of the Planck constant h.

Examples of the mass of objects

There are currently two independent primary methods that are capable of realising the definition of the kilogram with relative uncertainties within a few parts in 108. The first of these relies on determining the unknown mass of an artefact using a Kibble balance. The second method compares the unknown mass to the mass of a single atom of a specified isotope by counting the number of atoms in a crystal, where the mass of the atom is known in terms of h, c and ΔνCs.

Named after its inventor, British scientist Bryan Kibble, the Kibble balance is an extremely precise measuring instrument designed to determine the unknown mass, mx, of an artefact x.

The measurement process is carried out in two modes – weighing mode and velocity mode. Depending on the design of the instrument, these modes may occur successively or simultaneously.

In weighing mode, the artefact x is placed on a pan that is attached to the coil. A downward gravitational force acts on the artefact x. This is equal to the product of the mass of the artefact, mx, and the local value of the acceleration due to gravity, g. A current is passed through the coil, and is adjusted until the electromagnetic force on the coil precisely balances the weight of the artefact. When equilibrium is reached, the acceleration due to gravity, g, acting on the artefact, and the current, I1, flowing through the coil are measured.

In velocity mode, the artefact x is removed from the instrument and the current applied through the coil is switched off. The same coil is then moved through the surrounding magnetic field at a precisely controlled constant velocity. By Faraday’s law of induction, a potential difference, U2, is induced across the ends of the wire in the coil. The measured voltage is equal to the product of the velocity of the coil, v, the magnetic field strength, B, and the length of the wire in the coil, L.

The instrument is designed so that the properties of the magnetic field, the coil, and their alignment, remain the same in each measurement mode. This means that the value of BL should be the same in the equation for each mode. BL can then be eliminated by combining the two equations:

To establish a link between the macroscopic mass, mx, and the Planck constant, h, the electrical quantities voltage and current are measured using two macroscopic quantum phenomena, the Josephson effect and the quantum Hall effect.

The Josephson constant, KJ, is defined in terms of the Planck constant, h, and the elementary charge, e:

The Josephson effect allows an unknown voltage, U, to be determined as a dimensionless multiple, u′, of a combination of the Josephson constant, KJ, and a precisely measurable frequency, fJ.

The von Klitzing constant, RK, is also defined in terms of the Planck constant, h, and the elementary charge, e:

The quantum Hall effect allows an unknown resistance, R, to be determined as a dimensionless multiple, r′, of the von Klitzing constant, RK.

The current, I1, can be determined using Ohm’s law by measuring the voltage drop, U1, across the terminals of a stable resistor of value R.

Substituting the macroscopic quantum expressions for voltage and resistance gives: 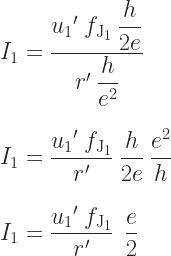 The measured voltage, U2, can be expressed as:

The value for the mass, mx, of the artefact x is derived from the Kibble balance equation:

Substituting the macroscopic quantum expressions for I1 and U2 gives:

where u1‘, u2‘ and r′ are dimensionless experimental quantities, and fJ1 and fJ2 are frequencies, all associated with the measurements of current and voltage.

The elementary charge, e, cancels out from the equation, giving:

This equation establishes the link between the macroscopic mass, mx, and the Planck constant, h.

Prior to the 2019 redefinition of the SI, the Kibble balance was able to measure the Planck constant to about 34 parts per billion, with reference to a standard one kilogram mass – a physical artefact, traceable to the international prototype of the kilogram, the IPK.

The BIPM Kibble balance operates with the following parameters: