Non-SI unit accepted for use with SI

The arc second is a non-SI unit accepted for use with the SI. 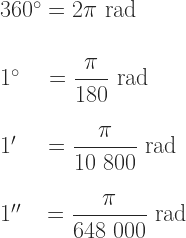 For some applications such as in astronomy, small angles are measured in arcseconds (i.e. seconds of plane angle), denoted as ″, or milliarcseconds, microarcseconds and picoarcseconds, denoted mas, μas and pas, respectively, where arcsecond is an alternative name for second of plane angle.